Six of the top ten world's biggest arms dealers are based in the Netherlands in order to benefit from its favourable tax and trade system. 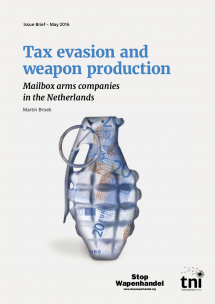 About tax evasion and weapon production

The revelations of the leaked Panama Papers in April 2016 pushed the issue of tax and tax evasion high up the international political agenda. Prompting scandals and high profile resignations, the 11.5 million documents from the offshore law firm Mossack Fonseca unveiled some of the tricks and strategies that countless politicians, businessmen and elites use to avoid taxes. Among them were arms companies and arms traders, including blacklisted individuals as well as major arms corporations such as Italian arms giant FinnMeccanica.

However Panama is just one of the many countries offering corporations secrecy and means of avoiding tax. The Netherlands is another leading player, providing a legal home to thousands of corporations, attracted by its low tax rates, its lack of transparency requirements and its bilateral investment agreements with many nations. Corporations with nothing more than a postal address are able to evade taxes in their own countries, file arbitration claims using Dutch investment agreements, and hide ownership and account details. Amongst the big companies using the Dutch evasion routes are a large number of arms manufacturers and major international defence companies.

Who are these tax evading arms companies and what are their strategies? In this report, Stop Wapenhandel and Transnational Institute publish their findings resulting from a search through the Dutch Chamber of Commerce. We found a large number of arms-producing companies with shell companies established in the Netherlands. Most of the production of these companies takes place in the major western arms-producing countries; the United States, United Kingdom, France and Germany. The arms companies turned out to have zero or minimal personnel presence in the Netherlands. Their almost empty offices and sometimes only having a mailbox allows them to legally pay as little tax as possible.

The top 100 global arms companies1 has been used as the starting point for this research. Of the almost US$ 450 billion annual defence production, these top 100 companies are responsible for $392.6 billion.

The research uncovered the following facts:

Many of these companies have a record of corruption that goes beyond tax evasion. The Stockholm International Peace Research Institute (SIPRI) estimates that corruption in arms trade contributes approximately 40 per cent to all corruption in global transactions. Furthermore, an OECD report on implementing anti-corruption policies, stated that “out of the 22 foreign bribery allegations mentioned, 12 concern mailbox companies.”

Tax evasion by arms companies is therefore doubly cynical. For not only are arms companies using, as all companies do, economic infrastructure paid for by taxes, their products too are paid for by taxes. The lion share of what arms companies produce is bought by governments. Moreover, much of their research and development is subsidised by governments or done in cooperation with publicly funded universities and/or research institutes. And prices paid by tax payers are inflated further because of high levels of corruption. As this study shows, arms companies profit in all possible ways from public money but contribute as little as possible to the public purse.

The biggest cost of hosting disreputable arms companies is of course the countless human lives destroyed or devastated by conflict. Helping arms companies avoid their financial responsibilities assists this deadly trade. It is time to acknowledge that the Netherlands by providing such an attractive tax haven for these arms companies bears some responsibility for both the financial and human costs caused by their activities.