Combines political economy analysis with a contextual critique of major ideological concepts of the regime change. 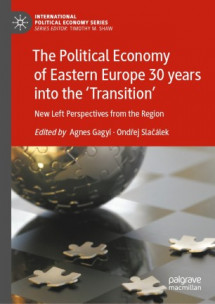 This book makes an important and wide-ranging contribution to understanding social change in Central and Eastern Europe.

In line with the open and grounded sharing of experiences that has characterised the making of this volume, the editors and the individual contributors have avoided the temptation of producing a prescriptive book, of the sort that has proliferated in past decades in the field of left politics and to which many scholars continue to dedicate their efforts. They do make general assumptions about the political actors and strategies of the new left forces in Eastern Europe, but the methodology used to reach the conclusions is based on a thorough empirical examination and analysis of the experiences of each country, rather than simply applying a monolithic theoretical model to the realities of different political processes in the diverse countries of the region.

It always helps to know the origins of a collaborative project. For us, fellows of the Transnational Institute (TNI), the roots lie thirty years back when in June 1990, six months after the collapse of the USSR, we convened in Amsterdam a meeting of activists from Eastern and Western Europe. From what was then Czechoslovakia came students who had joined Charter 77 on Prague’s Wenceslas Square. From the former German Democratic Republic came feminist and peace activists who had been in Alexanderplatz as part of the movements that brought down the Berlin Wall. A peace movement supporter came from Hungary, along with a sociologist from an independent network of academics researchers.

A member of a local organisation supporting Solidarity came from Poland along with someone from a newly formed feminist group. And a young intellectual came from the former Yugoslavia, active in building social movements across the Balkans.

Around the oval table of TNI’s old offices opposite the Van Gogh Museum, they sat with feminists, peace, green and other civil society activists from Western Europe. We discussed shared concerns: the meaning and scope of personal and social engagement; how to build or strengthen democratic institutions rooted in peace and justice; how to combine pluralism with egalitarianism; and how to restructure our ideas and practices as means that pre-figure the end goals, rather than the goals justifying the means. All of us were active in social movements committed in different ways to democracy and acting independently of the state, the market, private companies and political parties. We drew on our contrasting experiences to shed light from different angles on the common concerns. Respective understandings of rapidly changing politics, economics and social relations in both parts of Europe was a hundred times greater than had each person continued to stare at these relationships only from her or his own experience. There was a visceral sense of excitement at having a shared quest. We were all searching for, and experimenting with ways of transforming unequal and increasingly authoritarian societies while avoiding the fantasy of a benevolent centralised state and its corollary, a single benevolent political party. By learning from the failings of social democracy in what was then called “the West”, we were also searching for social and co-operative means of wealth creation rather than relying on the state or private corporations. It was a collaborative quest we all wanted to deepen and expand.

But anxiety also permeated the discussions. Even in 1990, there were already menacing threats that in the following years would make exchanges and collaboration between “Eastern” and “Western” activist- scholars in Europe very difficult. In the former communist countries of Europe, there were signs of new forms of authoritarianism, made more toxic by appeals to nationalism. On the capitalist side of Europe, there were signs of a determined class war against trade union power and the welfare state. These threats became all too real, almost fatally closing the spaces for transformative practice both in the east and in the west of Europe, destroying the strength of movements that depended, para- doxically, on the social democratic policies that the activists and thinkers meeting in Amsterdam so derided.

Fast forward two decades, and TNI convenes another, more global, encounter in Amsterdam in February 2016 around that same oval table. The purpose was to jointly draft a research agenda for a decentralised New Politics think tank on counter-hegemonic politics. Across Latin America, progressive governments—which had been a beacon of hope for much of the left everywhere—were in retreat or losing their original democratic and participatory credentials. In the United States and Europe, reinvigorated authoritarian forces and corporate interests had accumulated power at levels unprecedented in recent history.

An outcome of that 2016 encounter, and a subsequent meeting in Amsterdam in 2018, was an invitation to TNI from a group of enthusiastic and mainly young activists from former communist countries in Europe to co-organise a conference in Prague in 2019 which would analyse the new political developments. The two of us jumped at the opportunity to renew the quest that had begun three decades ago, now with a new generation that had learnt hard lessons and developed sophisticated analyses from which activists worldwide have much to learn.

The idea of this book was born of the Prague encounter. It contributes much-needed insights into the evolution of left political imagination in Eastern Europe since 1989, addresses acute biases in the global sense of European left politics and offers fresh ideas about how to achieve democratic and emancipatory alternatives that hold lessons for us all everywhere. Perhaps most importantly, it contributes to the efforts of left activists from across the region to meet, share and build a common emancipatory project.

Life in Transition and in Crisis. The Political Autobiography of a Generation 17
Dana Doms ̧odi and Florin Poenaru

When Did a Transition to Capitalism Start in Serbia? 41
Vladimir Simovic ́ and Tanja Vukša

Ukraine and the (Dis)integrating “Empire of Capital” 97
Yuliya Yurchenko

Post-dissent and the New Right: Problems and Potential of post-Communist Dissent in Slovakia and Beyond 151
Joseph Grim Feinberg

The Shame Movement in the Context of Georgia’s 30 years of Transformation: A Gramscian Analysis of Civil Society 169
Nino Khelaia and Tornike Chivadze

The New Protest Movements and the Left in Russia: To Overcome the Crisis of Hegemony 205
Oleg Zhuravlev

Fear, Doubt and Money. War of Ideas, Production of Ignorance and Right-Wing Infrastructures of Knowledge and Hegemony in Poland 223
Andrzej W. Nowak