Venezuela - Perspectives from the South

Venezuela is passing through a period of acute political, economic and social turmoil, which has intensified the debate within the regional and global left about the nature, the legacy and the prospects of the Bolivarian process. 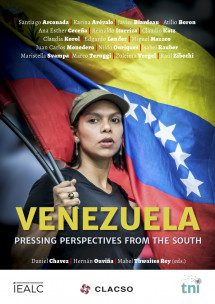 About venezuela - perspectives from the south

What structural or historical factors have conditioned the origin and evolution of the current situation? And what concrete proposals are being made to overcome the crisis from an emancipatory perspective? Latin American scholars and activists from diverse ideological and academic backgrounds offer an in-depth analysis of what is going on in Venezuela right now.

Introduction: Rethinking Venezuela from the left and against indifference

Indifference is the deadweight of history. Indifference operates passively, but it operates. It is fate, that which cannot be counted on. It twists programmes and ruins the best-conceived plans. It is the raw material that ruins intelligence.

What comes to pass, either the evil that afflicts everyone, or the possible good brought about by an act of general valour, is due not so much to the initiative of the active few, as to the indifference, the absenteeism of the many.

Sense and objectives of this publication

Since March 2017—as politics has become increasingly polarised in Venezuela with the publication of interviews, collective pronouncements and statements by progressive intellectuals and political and social activists—the Latin American left has been immersed in a profound and highly passionate debate over the present, the past and the possible future of the Bolivarian process.

The deep chasm that has opened between the participants in this discussion can be seen in messages circulating over social networks in recent months that discredit anyone who may disagree with a particular position. While from one side the supposed collaborators with imperialism are denounced and alarms sounded of a conspiracy by the global right, from the other the alleged silence before or complicity with authoritarian or repressive practices is criticised. While some analysts have argued that criticism of the government is brought to bear in the advance of regressive forces and weakens the revolution, others have responded that the left needs to abandon its dogmas, condemn authoritarian deviations, and learn from past errors about the unconditional defence of the failed socialist processes of the previous century.

In releasing this publication amid this panorama we make the implicit assumption that the seemingly antagonistic perspectives are not necessarily irreconcilable, and that the Latin American left is not irreversibly fractured in its interpretation of the Bolivarian process. The ideas presented in this report demonstrate that someone can defend the Bolivarian process and, at the same time, remain critical of some of its most obvious limitations or errors, or be critical of the government and at the same time defend the many victories and achievements of the same process.

This publication is also an implicit recognition that no transformative process is chemically pure in terms of its objectives, driving forces or results. As Atilio Boron expresses in the final pages of this paper, it is not a question of “silencing our criticisms of the Bolivarian government,” but of identifying concrete problems and proposing alternatives through frank and fraternal debate “to improve its performance.”

The purpose of this publication is thus to contribute to the creation of a space for debate that could help to overcome the defensive and largely sectarian logic that defines current discussions within the Latin American left. This implies mutual reflection over opinions and data that may be perceived as conflicting or mistaken, endeavouring to exchange relevant and productive knowledge—particularly to the benefit of the popular sectors of Venezuela—without attempting to coerce those who do not necessarily share one’s own ideas. This does not mean ignoring different approaches nor attempting to force a consensus, but clarifying the diverse perspectives and readings of the current crisis and initiating a new type of dialogue.

None of the participants in this conversation can be assumed neutral in view of the current situation in Venezuela. Quite obviously, there are differing sensibilities and theoretical-ideological communities at work within the Latin American left in general, and in Venezuela in particular, but beyond whatever interpretations of the country’s current reality may exist, none of the participants in this exchange is a member of the right. There are, there have been and there will likely continue to be many discrepancies, but always from an emancipatory perspective. None of us remains indifferent, in the sense suggested in Gramsci’s above quotation.

In short, each of us participating in this initiative set out to contribute what s/he truly thinks about one of the richest and most dynamic experiences of social and political change. We aspire to contribute to an exchange that functions not as a mere intellectual exercise in analytical comprehension or academic inquiry, but as a useful tool for reflection both inside and outside Venezuela. Above all we value our comrades in that country who now face an extremely tense situation, in which the destinies of a people who suffer and struggle are being played out. We are not indifferent to how this crisis is resolved, because its consequences will be paid, primarily, by the humblest and most vulnerable citizens, as well as the most tenacious and committed.

Together we seek to counteract the media bombardment and Manichean positions that tend to distort and/or erase the most problematic issues and factors of the Venezuelan process, by contributing, from myriad angles and viewpoints, to a detailed, rigorous and critical analysis of its complex reality. We have no doubt that the denouement to the acute crisis that the Bolivarian process is going through—and that the people themselves must resolve by exercising their full right to self-determination—will spell the fate of other struggles throughout Latin America and the Global South. As Edgardo Lander points out in the second chapter of this report, the resolution of the crisis in Venezuela will have an effect

not only on Latin America, but also on emancipatory aspirations, struggles for social change and the projects of the left in diverse parts of the world, since Venezuela has become a very important reference point for many movements attempting to spur radical changes in their own countries. If the Venezuelan process is defeated, the political consequences will be deep and affect other nations around the globe.

Thinking together and debating fraternally and respectfully with our Venezuelan peers through this difficult stage of the Bolivarian process demands the utmost care. Conscious of this need, this initiative started with an invitation to a broad and diverse group of researchers and activists from various countries in Latin America (plus a Spaniard with a long career of academic and political work in the region) by the Transnational Institute (TNI) and the Institute for the Study of Latin America and the Caribbean at the University of Buenos Aires (IEALC/UBA), with support from the CLACSO Working Group on Counter-Hegemonic Alternatives from the Global South. Each participant was asked to share his or her vision with regard to the roots and features of the current crisis in Venezuela and the prospects for resolving it. The proposal to convene diverse views from different countries was very well received by our Venezuelan peers. In the words of Javier Biardeau:

One has to pay close attention to what’s happening in Venezuela on a daily basis, because the pace of events is very fast, and as an actor who is in a sense involved in what is happening inside the country as a key witness, as an analyst of the situation, one also has to get the view from outside. Those not living in the country can, in some cases, take a cooler-headed approach to try to get the whole picture of how the various forces relate to one another right now within Venezuela and upon Venezuela, and thus clarify how to proceed most effectively.

The exchange of ideas was structured on the basis of four key thought-provoking questions referred to in the title of each chapter of the report. In order to stimulate the collective debate and the exchange of views on and interpretations of the Bolivarian process, and the possible ways to resolve the difficult situation that the country is now embroiled in, we asked the participants to reflect on Venezuela’s recent history and the internal, regional and global factors that have brought on the current crisis. Based on the responses received—whether from oral interviews or written contributions—we reordered and edited the reflections submitted by each participant around a series of relevant sub-questions, in an attempt to make the final document more dynamic and easier to read.

At TNI and IEALC/UBA we consider it essential to commit ourselves to ideas and at the same time to take on a commitment to support emancipatory processes as they evolve. Venezuela remains an inescapable point of reference owing to the boldness and paradigm-breaking that the Bolivarian process—if not without contradictions—managed to bring off in the late 1990s. Since then, critical thinking has on numerous occasions been nurtured by, and has contributed to, struggles and initiatives as they develop in the volatile territory of Latin America.