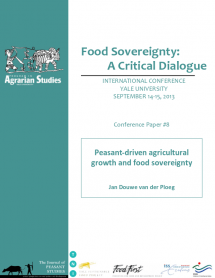 This paper gives several explanations (all individually valid but stronger in combination) as to why peasant agriculture results in sturdy and sustainable growth – it also identifies the factors that undermine this capacity. The paper also argues that peasant agriculture is far from being a remnant of the past. The different peasantries of the world are shaped and reproduced by today’s capital (and more specifically by current food empires), and equally, they help to shape and contribute to the further unfolding of forms of capital related to food and agriculture. It is important to understand this two-way interaction between capital and peasant agriculture as this helps to ground the concept of food sovereignty.

This article is underpinned by three assumptions. First, the debate about enlarging total agricultural production is very real. Although this debate is currently used to assess the hegemony of food empires and imperial science, we cannot throw away the baby with the bathwater. Secondly, the capacity to produce enough (at different levels, distinguishing different needs, etc.) needs to be an integral part of food sovereignty discourse. Thirdly, I am convinced that peasant agriculture has the best credentials for meeting food sovereignty and has the capacity to produce (more than) sufficient good food in a way that can satisfy the (many) objectives of producers themselves as well as for society at large.

Jan Douwe van der Ploeg is currently professor of Transition Studies at Wageningen University in the Netherlands and adjunct professor in Rural Sociology at China Agricultural University in Beijing. He worked with peasant organizations in Peru, Colombia, the Netherlands and Italy. Recently he co-authored an HLPE report on ‘Investing in smallholder agriculture for food security’ that was written on request of the Committee for World Food Security of the FAO. His most recent book is Peasants and the Art of Farming: A Chayanovian Manifesto (2013, Fernwood).