Cannabis policy reform in Europe Bottom up rather than top down

While in the Americas cannabis policy reform is taking off, Europe seems to be lagging behind. At the level of national governments denial of the changing policy landscape and inertia to act upon calls for change reigns. At the local level, however, disenchantment with the current cannabis regime gives rise to new idea. 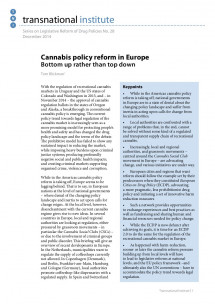 With the regulation of recreational cannabis markets in Uruguay and the US states of Colorado and Wash­ington in 2013, and – in November 2014 – the approval of cannabis regulation bal­lots in the states of Oregon and Alaska, a breakthrough in conventional cannabis policy is emerging. The current policy trend towards legal regulation of the cannabis market is increasingly seen as a more prom­ising model for protecting people’s health and safety and has changed the drug policy landscape and the terms of the debate. The prohibitive model has failed to show any sustained impact in reducing the market, while imposing heavy burdens upon criminal justice systems; producing profoundly negative social and public health impacts; and creating criminal markets supporting organised crime, violence and corruption.

While in the Americas cannabis policy reform is taking off, Europe seems to be lagging behind. That is to say, in European nations at the level of national governments – where denial of the changing policy landscape and inertia to act upon calls for change reigns. At the local level, however, disenchantment with the current cannabis regime gives rise to new ideas. In several countries in Eu­rope, local and regional authorities are looking at regulation, either pressured by grassroots movements – in particular the Cannabis Social Clubs (CSCs) – or due to the involve­ment of criminal groups and public disorder. This briefing will give an overview of recent developments in Europe. In the Nether­lands, municipalities want to regulate the supply of coffeeshops currently not allowed. In Copen­­hagen (Denmark), and Berlin, Frankfurt-am-Main, Hamburg and Cologne (Ger­many), local au­thorities pro­mote coffeeshop-like dispen­saries with a regu­lated supply. In Spain and Swit­zer­land re­gional and local authorities want to allow Cannabis Social Clubs, while in Belgium, Por­tugal, France and the UK campaigns for CSCs are gaining momentum.

The European Union (EU) lacks competence to embark upon can­na­bis pol­icy reform, which falls under the remit of member states. Neverthe­less, European law builds on the three UN drug control conven­tions that restricts cannabis exclusively to medical and scientific purposes and obliges member states to adopt measures to establish recreational cannabis as punishable offences – either penal or administrative. Although outright criminalization of the recreational use is exempted and the obligations are sub­ject to constitu­tional limitations of a country, when it comes to cultivation, pro­duction, distribution, im­port and export, possession or any other action for recreational purposes, options – other than non-enforcement of in­fractions – are very limited. Moreover, EU mem­ber states have agreed to cooperate and to take the most ap­pro­priate measures against cannabis culti­vation for recrea­tional use – including obligations to prohibit such acts.

The current legal and political straitjacket in Europe is extremely difficult to reconcile with the request of local authorities to effectively regulate the supply of can­na­bis for recreational use as an alternative to the negative consequences of the current restrictive arrangements. It would mean that European states would have to violate the UN conventions, just as Uruguay and the federal US govern­ment have done. This is not impossible, but would require political will to do so. As in the US, different policies regarding personal use and pos­session for per­sonal use al­ready exist in Europe, from de jure decriminalisation in Portugal and the Czech Republic to full prohibition in Sweden, as well as intermediate de facto decrimi­nalisation in countries such as the Netherlands, Belgium, Luxembourg, Switzerland, Ger­many and Spain. The ques­tion is why this could not be extended to regulating cul­tivation practices. If this is possible in a federal state like the US, why should that not be possible in the European Union?

National governments in Europe are in a state of denial about the impact of cannabis policy reform that is beginning to take shape worldwide, in particular in the US, and ignore calls for change from local au­thorities that have to deal with the negative consequences of a persisting illicit cannabis market. While his­torically liberal countries like the Netherlands and Denmark used to defend their policies with a pub­lic health argument of a separation of the markets of less and more hazardous drugs, the emphasis has shifted to a public security approach, to counter the public disorder of street dealing, and the in­volve­ment of organized crime groups in illicit cultivation and supply. As shown above, initially this has led to more re­strictive policies at the national level, but the failure of that approach is becoming more and more obvi­ous and is leading to administrative 'revolts' by municipalities that are experiencing the nega­tive conse­quences of those policies.

The de facto or de jure decriminalization of cannabis and halfway regulations like the Dutch coffee­shop sys­tem, while use­ful to avoid unnecessary criminalization of users and separating the markets of can­nabis and more harmful drugs, do not address the supply of cannabis. Local authorities are con­fronted with a range of problems that, in the end, are impossible to solve without some kind of a regu­lated and trans­parent supply chain. Apart from diminishing the public security problems mentioned above, regula­tion also provides solutions for consumer-protection issues such as quality control of the can­nabis in terms of the use of pesticides, access barriers such as age limits and maximum amounts to be purchased per user per day, week or month, and controls of the THC and CBD contents of can­nabis.

Increasingly, local and regional authorities, non-governmental pressure groups and grassroots move­ments are advocating change and many initiatives are under way across Europe, mainly around the CSC move­ment. The original Cannabis Social Club model developed in Spain has spread to Bel­gium, France, the Netherlands, Italy and the United Kingdom, where about 70 cities have clubs, al­though they are not ac­tively growing due to the severe penalties. In Spain, the autonomous regional govern­ments of Cata­lo­nia and the Basque Country, as well as towns like Barcelona and San Sebastian, have adapted and recog­nized the phenomenon while trying to regulate the ever-growing number of CSCs.

Local authorities in other countries are advocating various forms of coffeeshop-type dispen­sa­ries with a regulated supply. In the Netherlands, about 56 communities have embraced the Joint Regulation mani­festo to regulate the cultivation and supply of the back door of the coffeeshop. In other countries, similar initiatives for regulation of the cannabis market, from cultivation to marketing, have emerged, for example in Copenhagen in Denmark and districts in Berlin, Frankfurt, Hamburg and Cologne in Ger­many. Meanwhile, other local governments seek regulation under the CSC model, for example in Utrecht in the Netherlands. In Switzerland in particular, municipali­ties/can­tons like Geneva, Basel, Bern and Zürich are looking into setting up "can­nabis users associa­tions" based on the CSCs and Portuguese-style dissuasion commissions to deal with youth and possible problematic users. For countries that have already decriminalised, such as Portugal and the Czech Republic, it would only be a minor step to advance towards regulation models.

EU Member States remain the main actors in the EU drug policy field; at the level of the EU, subsidiarity applies. While common agreements in Europe have been achieved at the supra-national level, in par­tic­ular re­garding cross-border drug trafficking and police and judicial cooperation, drug legislation and policies of individual Member States remain within their exclusive national compe­tence. Differences remain be­tween and within EU Member States, reflecting their social and political institutions, different public at­titudes, social and cul­tural values and traditions, and varying financial and human resources. Drug control policies in the EU vary significantly, from a liberal pragmatic harm reduc­tion ap­proach – notably in the Netherlands, Portugal and the Czech Republic – to a restrictive prohibi­tionist approach in Sweden, which makes a common EU drug policy difficult to imagine.

As others have argued, European cannabis policy could best develop along the lines of "multi-level govern­ance", an emerging style of governance in the EU – in particular regarding social policies – in which multiple actors on multiple levels are engaged, and specific details of governance are decentralised and may diversify under EU guidelines. In this model, practical decisions are made at the local level, encour­aging greater involvement from citizens – a guiding principle in the EU. "A system of multi-level governance would allow initiatives to develop at the local level with power following a bottom-up structure," as opposed to top-down solutions that do not fit local and regional needs. Given the already wide diversity of drug policies in Europe, different cannabis regulation regimes would then no longer be an arena of multi-lateral, or even national, contention, but would be judged on their effectiveness and leave the desired room for manoeuvre for local authorities.

Cities and regions that want reform should follow the example set by their predecessors when they con­stituted Euro­pean Cities on Drug Policy (ECDP) in 1993. In 1990, Amsterdam, Frankfurt, Hamburg, and Zürich initiated the network by signing the Frankfurt Resolution, which became the charter of the ECDP. Other cities joined, including Basel, Charleroi, Dort­mund, Hamburg, Hannover, Rotterdam, Ljubljana and Zagreb amongst others. These cities joined forces to advocate a more pragmatic, less prohibitionist drug policy including the decriminalization of cannabis, and initiated a set of innovative harm-reduction meas­ures – such as: heroin-substitution programmes, social inclusion through housing-and-work pro­gram­mes, drug-consumption rooms and heroin prescription.

It is interesting to read the statement of pur­poses of the network:

Drug problems are crystallising, above all, in major cities, producing the whole pallet of subse­quent prob­lems to a specifically intensive extent. Approaching these problems solely by conven­tional strategies of repressive, therapeutic, or preventive measures have led us to borders that cannot be crossed without the development and implementation of innovative - and sometimes unconventional policies.
Moreover, it happens rather frequently that national or international drug legislation and guide­lines prove to be instruments unsuited for the development of pragmatic approaches at com­munal level. Therefore, we observe a clear discrepancy between international conventions, their realisation at governmental level, and local solutions. In this respect, we had to recognise that we are unable to delegate the problem to the governments of the states. Instead, we are being called to develop local strategies in collaboration and exchange with other cities and regions.

All of this is still relevant regarding the current state of cannabis policies. It is also interesting to note that at the core of the ECDP network were some of the cities that are now calling for a regula­tion of the can­nabis market. Drug policy reform is often a bottom-up process, as the example of the ECDP has shown after having successfully initiated the adoption of effec­tive harm-reduction strategies at the national and, ever more, the international level. Such a network provides opportunities to ex­change experiences and best practices, as well as fundraising and sharing human and financial resources needed for policy change. While the ECDP is now defunct after achieving its goals, it is time for an ECDP 2.0 to do the same for the regula­tion of the recreational cannabis market in Europe. The question facing Europe today is no longer whether or not there is a need to reassess and modernize cannabis policies, but rather when and how to do it.

This briefing has been produced with the financial assistance of the Drug Prevention and Information Programme (DPIP) of the European Union and the Open Society Foundations (OSF). The contents of this project are the sole responsibility of TNI and can under no circumstances be regarded as reflecting the position of the donors.