This report seeks to explore and highlight the extent of today’s global border security industry, by focusing on the most important geographical markets—Australia, Europe, USA—listing the human rights violations and risks involved in each sector of the industry, profiling important corporate players and putting a spotlight on the key investors in each company. 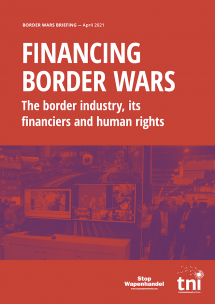 Migration will be one of the defining human rights issues of the 21st century. The growing pressures to migrate combined with the increasingly militarised state security response will only exacerbate an already desperate situation for refugees and migrants. Refugees already live in a world where human rights are systematically denied. So as the climate crisis deepens and intersects with other economic and political crises, forcing more people from their homes, and as states retreat to ever more authoritarian security-based responses, the situation for upholding and supporting migrants’ rights looks ever bleaker.

States, most of all those in the richest countries, bear the ultimate responsibility to uphold the human rights of refugees and migrants recognised under International Human Rights Law. Yet corporations are also deeply implicated. It is their finance, their products, their services, their infrastructure that underpins the structures of state migration and border control. In some cases, they are directly involved in human rights violations themselves; in other cases they are indirectly involved as they facilitate the system that systematically denies refugees and migrants their rights. Most of all, through their lobbying, involvement in government ‘expert’ groups, revolving doors with state agencies, it becomes clear that corporations are not just accidental beneficiaries of the militarisation of borders. Rather they actively shape the policies from which they profit and therefore share responsibility for the human rights violations that result.

This state-corporate fusion is best described as a Border Industrial Complex, drawing on former US President Eisenhower’s warning of the dangers of a Military-Industrial Complex. Indeed it is noticeable that many of the leading border industries today are also military companies, seeking to diversify their security products to a rapidly expanding new market.

This report seeks to explore and highlight the extent of today’s global border security industry, by focusing on the most important geographical markets—Australia, Europe, USA—listing the human rights violations and risks involved in each sector of the industry, profiling important corporate players and putting a spotlight on the key investors in each company.

The border industry is experiencing spectacular growth, seemingly immune to austerity or economic downturns. Market research agencies predict annual growth of the border security market of between 7.2% and 8.6%, reaching a total of $65–68 billion by 2025. The largest expansion is in the global Biometrics and Artificial Intelligence (AI) markets. Markets and Markets forecasts the biometric systems market to double from $33 billion in 2019 to $65.3 billion by 2024—of which biometrics for migration purposes will be a significant sector. It says that the AI market will equal US$190.61 billion by 2025.

The markets for military and border control procurement are characterized by massively capital intensive investments and contracts, which would not be possible without the involvement of financial actors. Using data from marketscreener.com, the report shows that the world’s largest investment companies are also among the major shareholders in the border industry.


In all cases, therefore, the financing depends on our money. In the case of state ownership, through our taxes, and in terms of asset management funds, through the way individual savings, pension funds, insurance companies and university endowments are directly invested in these companies via the giant Asset Management Funds. This financing means that the border industry survives on at least the tacit approved use of the public’s funds which makes it vulnerable to social pressure as the human rights costs of the industry become ever more clear.

Human rights and the border industry

Universal human rights apply to every single human being, including refugees and migrants. While the International Bill of Human Rights provides the foundation, including defining universal rights that are important in the context of migration, such as the right to life, liberty and security of person, the right to freedom from torture or cruel or inhumane or degrading treatment or punishment, and freedom from discrimination, there are other instruments such as the United Nations Convention Relating to the Status of Refugees (Refugee Convention or Geneva Convention) of 1951 that are also relevant. There are also regional agreements, including the Organisation of African Unity Convention Governing the Specific Aspects of Refugee Problems in Africa and the European Convention on Human Rights (ECHR) that play a role relevant to the countries that have ratified them.

Yet despite these important and legally binding human rights agreements, the human rights situation for refugees and migrants has become ever more desperate. States frequently deny their rights under international law, such as the right to seek asylum or non-refoulement principles, or more general rights such as the freedom from torture, cruel or inhumane treatment. There is a gap with regard to effective legal means or grievance mechanisms to counter this or to legally enforce or hold to account states that fail to implement instruments such as the UDHR and the Refugee Convention of 1951. A Permanent Peoples Tribunal in 2019 even concluded that ‘taken together, the immigration and asylum policies and practices of the EU and its Member States constitute a total denial of the fundamental rights of people and migrants, and are veritable crimes against humanity’. A similar conclusion can be made of the US and Australian border and immigration regime.

The increased militarisation of border security worldwide and state-sanctioned hostility toward migrants has had a deeply detrimental impact on the human rights of refugees and migrants.

The trend towards externalisation of migration policies raises new concerns as it seeks to put the human costs of border militarisation beyond the border and out of public sight. This has led to the EU, US and Australia all cooperating with authoritarian regimes to try and prevent migrants from even getting close to their borders. Moreover as countries donate money, equipment or training to security forces in authoritarian regimes, they end up expanding and strengthening their capacities which leads to a rise in human rights violations more broadly. Nowhere are the human rights consequences of border externalisation policies clearer than in the case of Libya, where the EU and individual member states (in particular Italy and Malta) funding, training and cooperation with security forces and militias have led to violence at the borders, murder, disappearances, rape, enslavement and abuse of migrants in the country and torture in detention centres.

The 23 corporations profiled in this report have all been involved in or connected to policies and practices that have come under fire because of violations of the human rights of refugees and migrants. As mentioned earlier, sometimes the companies are directly responsible for human rights violations or concerns. In other cases, they are indirectly responsible through their contribution to a border infrastructure that denies human rights and through lobbying to influence policy-making to prioritize militarized responses to migration. 11 of the companies profiled publicly proclaim their commitment to human rights as signatories to the UN Guiding Principles on Business and Human Rights (UNGPs), but as these are weak voluntary codes this has not led to noticeable changes in their business operations related to migration.

The most prominent examples of direct human rights abuses come from the corporations involved in detention and deportation. Classic Air Charter, Cobham, CoreCivic, Eurasylum, G4S, GEO Group, Mitie and Serco all have faced allegations of violence and abuse by their staff towards migrants. G4S has been one of the companies most often in the spotlight. In 2017, not only were assaults by its staff on migrants at the Brook House immigration removal centre in the UK broadcast by the BBC, but it was also hit with a class suit in Australia by almost 2,000 people who are or were detained at the externalised detention centre on Manus Island, because of physical and psychological injuries as a result of harsh treatment and dangerous conditions. The company eventually settled the case for A$70 million (about $53 million) in the largest-ever human rights class-action settlement. G4S has also faced allegations related to its involvement in deportations.

The other companies listed all play a pivotal role in the border infrastructure that denies refugees’ human rights. Airbus P-3 Orion surveillance planes of the Australian Air Force, for example, play a part in the highly controversial maritime wall that prevents migrants arriving by boat and leads to their detention in terrible conditions offshore. Lockheed Martin is a leading supplier of border security on the US-Mexico border. Leonardo is one of the main suppliers of drones for Europe’s borders. Thales produces the radar and sensor systems, critical to patrolling the Mediterrean. Elbit Systems provides surveillance technologies to both the EU and US, marketed on their success as technologies used in the separation wall in the Palestinian occupied territories. Accenture, IDEMIA and Sopra Steria manage many border biometric projects. Deloitte has been one of the key consulting companies to the US Immigration and Customs Enforcement (ICE) agency since 2003, while PriceWaterhouseCoopers provides similar consultancy services to Frontex and the Australian border forces. IBM, Palantir and UNISYS provide the IT infrastructure that underpins the border and immigration apparatus.

There are already examples of existing campaigns targeting particular border industries that have borne fruit. A spotlight on US migrant detention, as part of former President Trump’s anti- immigration policies, contributed to six large US banks (Bank of America, BNP Paribas, Fifth Third Bancorp, JPMorgan Chase, SunTrust, and Wells Fargo) publicly announcing that they would not provide new financing to the private prison industry. The two largest public US pension funds, CalSTRS and CalPERS, also decided to divest from the same two companies. Geo Group acknowledged that these acts of ‘public resistance’ hit the company financially, criticising the banks as ‘clearly bow[ing] down to a small group of activists protesting and conducting targeted social media campaigns’.

Every company involved or accused of human rights violations either denies them or says that they are atypical exceptions to corporate behavior. This report shows however that a militarised border regime built on exclusion will always be a violent apparatus that perpetuates human rights violations. It is a regime that every day locks up refugees in intolerable conditions, separates families causing untold trauma and heartbreak, and causes a devastating death toll as refugees are forced to take unimaginable dangerous journeys because the alternatives are worse. However well-intentioned, any industry that provides services and products for this border regime will bear responsibility for its human consequences and its human rights violations, and over time will suffer their own serious reputational costs for their involvement in this immoral industry. On the other hand, a widespread exodus of the leading corporations on which the border regime depends could force states to change course, and to embrace a politics that protects and upholds the rights of refugees and migrants. Worldwide, social movements and the public are starting to wake up to the human costs of border militarisation and demanding a fundamental change. It is time now for the border industry and their financiers to make a choice.