Agroecology has gained ground in recent years as the need to transform our agrifood system becomes increasingly clear. The food and financial crises of 2008, and the deepening climate and environmental crises, have revealed deep challenges for the way we produce and consume food. Global agrarian justice and food sovereignty movements, organised in global convergences like the Nyéléni Forum, have emphasised the importance of agroecology in this transformation. They highlight the political nature of agroecology: ‘it requires us to challenge and transform structures of power in society'. 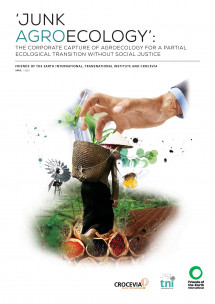 
At the same time, the growing recognition of these challenges has led a wide range of actors to start using the term ‘agroecology’ in different ways. In particular big business, and some NGOs, states and intergovernmental organisations that support them, are pushing for a narrow vision of agroecology, based on addressing environmental harms associated with industrial agriculture. Even on those terms this vision is inadequate, only partially addressing environmental damage. Beyond this, it undermines agroecology’s transformative potential through either preserving or deepening the inequality, exploitation, and power imbalances behind the current agrifood system.

Corporate, state, and international actors advocating for food system reforms often employ the terms ‘agroecology’ and ‘sustainable agricultural intensification’ interchangeably, obscuring the multiple and important differences between these approaches. Sustainable agricultural intensification is fundamentally centred on the need to increase productivity (yield or output per unit of land and human labour power), while reducing negative environmental and health impacts. It emphasises the use of technology to achieve this, and engages little with questions of governance, ownership, power, or control over the resources needed to produce, process, and distribute food. Agroecology, on the other hand, emphasises reduced external inputs, enhanced diversity, improved ecological and human health in harmonious relationship, social justice and political transformation, and improved equity and governance. It proposes much deeper transformations to the socioeconomic structures and systems that shape our agrifood system. Actors who obscure the differences between the terms are attempting to strip agroecology of this deeper meaning and transformational potential.

The major corporate actors in the agrifood system are defending their profits by advancing their own interpretation of agroecology, which includes ample opportunities for them to benefit and excludes its transformative component. Three major worldwide public-private initiatives have been especially key: (i) The Sustainable Agriculture Initiative (SAI), (ii) The New Vision of Agriculture (NVA), and (iii) The New Food and Land Use Economy Coalition (FOLU). Although there are differences between these initiatives, they operate under similar logics, with shared goals, a common mission to ‘turn smallholders into sustainable agribusinesses,’ and a shared political vision of how the worst ills of the current agrifood system can be moderated without any fundamental redistribution of value, power or control. These initiatives may make use of ‘agroecological nuances’ – especially certain tools and techniques – but they aim to preserve the social, political, and economic structures which allow them to profit enormously from global commodity chains under their command, and to ensure that the costs of this dominant agrifood system are born by others.

Changing so that everything stays the same: Three Obsessions of Big Agrifood Capital

We can get a clearer idea of the vision of agroecology, and food and agriculture more generally, that is advanced by transnational agrifood corporations through SAI, NVA, FOLU and similar multi-stakeholder international initiatives, by looking at three ‘obsessions’ that drive their work.

SAI, NVA and FOLU are obsessed with ‘productivism’: the idea that (endlessly) increasing food production is the only way to meet the challenge of feeding growing populations with finite resources. While there are real challenges here, this approach ignores the many forms of inequality, exclusion, marginalisation, and dispossession that are real drivers of global hunger today. The single-minded pursuit of ever-greater food production (with less land and labour) also leads to an uncritical reliance on technology. Improved technology is seen as the most important solution to the problems of the agrifood system, in spite of widespread evidence that technology on its own is unable to address the many complex social, political, economic, and cultural problems that lead to hunger and poverty, and may instead deepen inequality and exclusion. Advocates for agroecology defend a more nuanced approach to technology, which assesses individual technologies within their social and ecological context, and adopts only those which can play a role in addressing deeper systemic inequalities (or, at least, do not make these worse). Instead of focussing only on productivity agroecology aims at redistribution, diversity, and food as a Human Right rather than a commodity for ever increasing profit.

The obsession with new business opportunities

The corporations engaged in SAI, NVA, and FOLU have built their businesses around the current agrifood system. Their apparent embrace of agroecology – in their own modified and stripped-down form – has occurred because they see the possibility for new business opportunities, and possible profits. On the one hand, these actors are seeking to profit from the green economy, seeing recycling, conservation, and new ‘efficiencies’ in resource use as opportunities for higher profit margins. At the same time, using the language of ‘inclusive business models’ these actors are pushing autonomous farmers, fishers and pastoralists to incorporate themselves into the global ‘value chains’ which they already control. Transnational agribusinesses benefit when small farmers, fishers or pastoralists adopt their patented technology- or ‘green’ input-intensive models of farming, or when they shift from producing for their own consumption and local markets to selling their products to giant global commodity traders. The pressure put on small farmers, fishers and pastoralists to enter global value chains, both as producers and consumers, is justified firstly by insisting on the primacy of ‘free markets,’ and secondly by suggesting that food producers’ poverty is a result of their ‘exclusion’ from those free markets (rather than of the terms on which they are forced to engage with them). That is why SAI, NVA and FOLU focus on the principle of ‘inclusion’, but not on ‘redistribution’.

The obsession with a new public-private governance model

Since the global crises of 2008, multilateralism – a global system based on negotiations between states – has lost ground to ‘multistakeholderism’ - a governance system where decisions are shaped by consultations with broad groups of stakeholders, where big business has the upper hand. In theory, multistakeholder governance gives different social, corporate and state actors the same voice and voting powers. But, in reality, the different actors are in different positions of power, and have different capacities to advance their interests and views.8 The agribusiness sector actively seeks to influence NGOs, governments, and social organisations, trying to bring them around to the idea that corporations should play a key role in shaping and governing our collective global future, starting with food systems.

Big agrifood capital, and the coalitions and initiatives that represent it, are key actors behind the SAI, NVA and FOLU. In addition to recognised agribusiness corporations, chemical companies, financial firms, consumer goods corporations, states and intergovernmental organisations, large development and environmental NGOs, and philanthropic entities are all engaging in these corporate-led initiatives, and often supporting the ‘junk agroecology’ advanced by key players. At the same time, initiatives often receive public funds and support, and engage directly with states.
Through these initiatives, major corporations are proposing possible reforms to address some of the worst impacts of their own activities. The end goal of these reforms, however, is to ensure that big business can continue profiting, without fundamentally transforming either the unjust socioeconomic, ideological, political and ecological relations on which the current agrifood system is based, or the exclusionary and short-sighted ideology that legitimises it. In order to ‘change everything so that nothing changes’ the leading corporations have selectively integrated some key goals, discourses, and practices of agroecology. They use significant political, financial, media, and public relations resources to advance their narrow vision of agroecology, aiming to ensure that more transformative visions do not take root and threaten their profits.

However, in the words of the organisations that took part in the 2015 International Forum for Agroecology in Nyéléni, Mali, ‘Agroecology is a political issue’.31 A real agroecological transition must go hand in hand with public policies that: i) grant a central role in their design and implementation to small-scale food producers and rural and urban workers; ii) are consistent with national and international human rights instruments, including the United Nations Declaration on the Rights of Peasants and Other People Working in Rural Areas, and; iii) favour an agroecology that is true to its vision of ecosystem sustainability and its roots in social and environmental justice. The challenges that women and youth face in the current agrifood system must also be addressed at a deep, systemic, level not merely through improved access to markets or technology. Conversely, the promotion of ‘junk agroecology’ initiatives opens up the possibility of greater greenwashing of socially and environmentally destructive forms of production, and more deeply entrenches the unjust dynamics which have led to the current crises.

There is an urgent need to build participatory public policies for the development, promotion and implementation of agroecology for the benefit of all people, and especially small-scale food producers and rural and urban workers. This is the model of agroecology – by and for the working peoples of the planet — that could bring about a real transformation of our agrifood systems, resisting and rolling back their corporate capture.

Friends of the Earth International (FOEI)