Effective state policies and investments in support of small scale food producers does not only provide a socially just alternative to a model based on foreign direct investment in agro-industries, but it is also a safeguard against land grabbing. 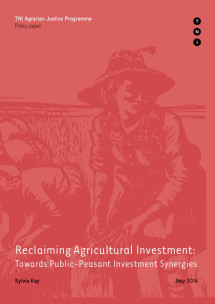 This report argues that there is a need to ‘reboot’ the debate on agricultural investment, away from the narrow corporate centric perspective, towards maximising synergies between public investments and the investments made by small- scale food producers.

With nearly 1 billion people malnourished and at least 70 percent of the world’s very poor living in rural areas, the majority of whom are dependent on agriculture for their livelihood, investing in agriculture is one of the most effective anti-poverty strategies. Yet, despite its vital importance, agricultural investment programmes are being increasingly left to the general commodity markets and outsourced to large-scale (corporate) investors unbound by the human rights obligations of states. In privatising responsibility for investing in agriculture, the dominant investment paradigm has succeeded in ‘kicking away the ladder’ and removed from the table key public policies to address the problems of rural poverty and hunger.

Instead the state is conceived of as a ‘neutral broker’ linking producers to agribusiness in a new development manage- ment approach characterised by value chains, supermarket contracts, and other forms of public-private partnerships. However, rather than acting as a vector of smallholder de- velopment, the agribusiness mode of production is more likely to lead to a situation whereby a small subset of pro- ducers prosper while the incidence and geography of rural hunger and poverty remain largely unchanged.

It is against this backdrop that this report makes a case for bringing back the state. This is demonstrated across a wide number of areas including:

• Reforming, not dissolving, agricultural development banks. Contrary to predictions that purely market driv- en approaches toward agricultural lending are viable, private sector financial institutions have not ‘stepped in’ when the state has withdrawn, leaving small-scale food producers and other rural peoples dependent on the usurious practices of informal money lending markets. This builds a case for reforming, not abandoning, agricultural development banks based on a stronger mix of public and private sector roles.

• Using public policy tools to open up new markets to small-scale food producers and strengthen local and regional food systems rather than relying on general commodity markets in order to retain greater value- added at holding and territorial level.

• The use of subsidies to compensate for resource inequality between different food producers in the use of agricultural inputs. A ‘subsidy to sustainability’ can also be deployed to incentivise farmers to adopt sound environmental practices.

• Setting a progressive agenda in agricultural research. A vast ‘knowledge gap’, in terms of funding and the allocation of resources, exists between conventional agriculture and biologically diversified farming sys- tems. This is the result of the rise of the private R&D industry as well as the power of the corporate lobby to shape the direction of public agricultural research which has meant that research agendas have tended to focus on the problems facing commercial farmers as well as those that benefit most from the agro-in- dustrial model, such as the pesticide and transgenics industries. Public agricultural research can therefore play a vital role in closing the knowledge gap and switching research priorities, in particular towards agro-ecology.

• (Re)distributive land reform in countries marked by deep inequalities in ownership and access to land. For many small-scale food producers, land is much more than a factor of production: it is the basis of their livelihoods, a way to be counted in political decision making, a means towards social inclusion and access to basic services, and a component of their culture and collective identity. Pro-poor land reforms should therefore be enacted which strengthen their full, meaningful, and effective access to and control over land.

• Essential rural social services, such as electricity, health, and water as well as infrastructure, such as roads and telecommunications. Key to creating an enabling environment for farmers to invest is to address the massive inequalities in service provision and use as well as infrastructure development that exist between rural and urban areas. These are typically underinvested in by the private sector because of their public goods characteristics.

• Buffering against food price shocks through the main- tenance of public stocks. In light of the food crisis, the role of public regulation in managing food price infla- tion must be revisited. Instead of relying on private risk management strategies and attending to the most vulnerable through targeted transfers, governments should intervene to stabilise prices. Public stocks can be an enormously useful and flexible tool for reducing volatility in agricultural commodity markets and avert- ing and responding to food emergencies as well as performing a whole host of other functions.

• Building resilience through social protections especially those that invest in human capital formation and link ‘livelihood protection’ (social welfare and safety nets) and ‘livelihood promotion’ (investment in agriculture and other productive sectors).

Maximising synergies between public investments and the investments made by small-scale food producers involves a state-society interactive approach which looks at how progressive change can occur by exploiting com- peting political tendencies within society and the state apparatus. It reminds us that ‘development’ is never a de- politicised, technical, or automatic process but rather the outcome of conflict and real life struggles. The term ‘syn- ergy’ as it is used in this report is therefore always im- bued with this sense of uncertainty and creative tension. It should never be interpreted as presupposing ‘win-win’ outcomes or as representing the final word on what is, by definition, a continuously unfolding and dynamic process of development and change.