How is the peace process in Myanmar going? What progress has been made toward reform? After decades under military rule, the 21st Century Panglong Conference has been welcomed as the most encouraging recent initiative to address humanitarian suffering and national instability. It prioritises ethnic peace and political reform at a moment of opportunity for national reconciliation. However, as ethnic conflict and refugee displacement continue worrying failings have started to appear, raising many warnings from the country’s troubled history. 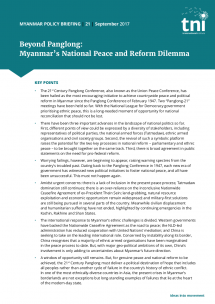 About beyond panglong: myanmar’s national peace and reform dilemma

This Myanmar Policy Briefing analyses the country’s ethnic peace and reform dilemmas, charting past initiatives and political consequences since independence until the present. From the time of the Panglong Conference in 1947, there have been attempts to achieve peace and national reconciliation during every era of government, but all have proven unsuccessful.

The coming year will be crucial in determining Myanmar’s political direction. Future peace meetings are scheduled. But at root, a fundamental question still needs to be answered: is “Panglong-21” a political endgame or is it just another step in the country’s conflict way of life? If a breakthrough is to truly occur, national inclusion, political dialogue and a complete halt to military offensives are now essential. The present crises in the ethnic borderlands are not exceptional or peripheral challenges but are central to addressing the failures of the modern-day state.