Expanding the fortress The policies, the profiteers and the people shaped by EU's border externalisation programme

The EU has made migration control a central goal of its foreign relations, rapidly expanding border externalisation measures that require neighbouring countries to act as Europe's border guards. This report examines 35 countries, prioritised by the EU, and finds authoritarian regimes emboldened to repress civil society, vulnerable refugees forced to turn to more dangerous and deadly routes, and European arms and security firms booming off the surge in funding for border security systems and technologies. 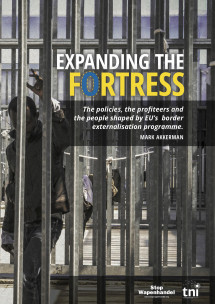 About expanding the fortress

The plight of the world’s 66 million forcibly displaced persons seems to only trouble the European Union’s conscience when the media spotlight turns on a tragedy at Europe’s borders. Only one European nation – Germany - is even in the top ten countries worldwide that receive refugees leaving the vast majority of forcibly displaced persons hosted by some of the world’s poorest nations. The invisibility therefore is only broken when border communities such as Calais, Lampedusa, Lesvos become featured in the news as desperate people fleeing violence end up dead, detained or trapped.

These tragedies aren’t just unfortunate results of war or conflict elsewhere, they are also the direct result of Europe’s policies on migration since the Schengen agreement in 1985. This approach has focused on fortifying borders, developing ever more sophisticated surveillance and tracking of people, and increasing deportations while providing ever fewer legal options for residency despite ever greater need. This has led many forcibly displaced persons unable to enter Europe legally and forced into ever more dangerous routes to escape violence and conflict.

What is less well-known is that the same European-made tragedy plays out well beyond our borders in countries as far away as Senegal and Azerbaijan. This is due to another pillar of Europe’s approach to migration, known as border externalisation. Since 1992 and even more aggressively since 2005, the EU has developed policies to externalise Europe’s border so that forcibly displaced people never get to Europe’s borders in the first place. This involves agreements with Europe’s neighbouring countries to accept deported persons and to adopt the same policies of border control, improved tracking of people and fortified borders as Europe. In other words, these agreements have turned Europe’s neighbours into Europe’s new border guards. And because they are so far from Europe’s shores and media, the impacts are almost completely invisible to EU citizens.

This report seeks to shine a spotlight on the policies that underpin this externalisation of Europe’s borders, the agreements that have been signed, the corporations and entities that profit, and the consequences for forcibly displaced people as well as the countries and populations that host them. It is the third in a series titled Border Wars that have examined Europe’s border policies and shown how the arms and security industry has helped shape European border security policies and have then reaped the rewards for ever more border security measures and contracts.

This report shows a significant growth in border externalisation measures and agreements since 2005 and a massive acceleration since the November 2015 Valletta Europe – Africa Summit. Using a plethora of new instruments, in particular the EU Emergency Trust Fund for Africa (EUTF), the Migration Partnership Framework and the Refugee Facility for Turkey, the European Union and individual member states are now providing millions of euros for an array of projects to stop migration of certain people from taking place on or across European territory.

This includes collaboration with third countries in terms of accepting deported persons, training of their police and border officials, the development of extensive biometric systems, and donations of equipment including helicopters, patrol ships and vehicles, surveillance and monitoring equipment. While many projects are done through the European Commission, a number of individual member states, such as Spain, Italy and Germany also take a lead in funding and supporting border externalisation efforts through bilateral agreements with non-EU-countries.

What makes this collaboration particularly problematic is that many of the governments receiving the support are deeply authoritarian, and the support they are receiving often goes to precisely the state security organs most responsible for repression and abuses of human rights. The European Union in all its policies has a fine rhetoric on the importance of human rights, democracy and rule of law, but there seems to be no limits to the EU’s willingness to embrace dictatorial regimes as long as they commit to preventing ‘irregular migration’ reaching Europe’s shores. As a result there have been EU agreements with and funding provided to regimes as infamous as Chad, Niger, Belarus, Libya and Sudan.

These policies therefore have far-reaching consequences for forcibly displaced persons, whose ‘illegal’ status already makes them vulnerable and more likely to face human rights abuses. Many end up in either exploitative working conditions, detention and/or get deported back to the countries they have fled from. Women refugees in particular face high risks of gender-based violence, sexual assault and exploitation.

Violence and repression against forcibly displaced persons also pushes migration underground, reconfigures the business of smuggling and reinforces the power of criminal smuggling networks. As a result, many persons have been forced to look for other, often more dangerous routes and to rely on ever more unscrupulous traffickers. This leads to an even higher death toll.

Moreover the strengthening of state security organs throughout the MENA, Maghreb, Sahel and Horn of Africa regions also threatens the human rights and democratic accountability of the region, particularly as it also diverts much needed resources from economic and social spending. Indeed, this report shows that Europe’s obsession with preventing migrants is not only diverting resources, it is also distorting Europe’s trade, aid and international relationships with the entire region. As many experts have pointed out, this is laying the ground for further instability and insecurity in the region and the likelihood of greater refugees in the future.

There is however one group that have benefited greatly from the EU’s border externalisation programmes. As the earlier Border Wars reports showed, it is the European military and security industry that have derived the most benefit for delivering much of the equipment and services for border security. They are accompanied by a number of intergovernmental and (semi-)public institutions that have grown significantly in recent years as they implement dozens of projects on border security and control in non-EU-countries.

The report reveals that:


The report examines these impacts by looking how these policies have played out in Turkey, Libya, Egypt, Sudan, Niger, Mauritania and Mali. In all of the countries, the agreements have led the EU to overlook or tone down criticisms of human rights abuses in order to sign agreements.

In Libya, an ongoing civil war and instability has not stopped the EU nor member states like Italy from channelling money towards border equipment and systems, training for the coastguard and funding of detention centres – even when news has emerged of coastguards firing on refugee boats or militias running detention centres like prison camps.

In Egypt, border cooperation has intensified with the German government despite the growing military consolidation of power in the country. Germany funds equipment and regular training for border police. Forcibly displaced persons in the country have found themselves trapped, unable to move onto Libya due to the security situation, and fired on by Egyptian coastguards if they attempt to take to the sea.

In Sudan, EU border support has not only brought an infamous dictatorship out of international isolation, it has even ended up bolstering the Rapid Support Forces, made up of Janjaweed militia fighters most responsible for human rights violations in Darfur.

The situation in Niger, one of the poorest countries worldwide, shows the costs of migration-control for local economies. Crack-downs on its northern city of Agadez have undermined the local economy and pushed migration underground making it more dangerous for migrants and increasing the power of armed smuggling gangs. Similarly in Mali, EU imposition of border externalisation measures on the country emerging from civil war threaten to re-awake that conflict.

All the case studies reveal a policy of EU interaction with its neighbouring region that has become almost single-mindedly obsessed with migration control regardless of its costs for the country or for forcibly displaced persons. It is a narrow and ultimately self-defeating concept of security because it does not tackle the root causes that cause people to migrate - conflict, violence, economic underdevelopment and the failures of states to justly manage these. Instead, by reinforcing the military and security forces in the region, it is likely to exacerbate repression, limit democratic accountability and stoke the conflicts that will lead to more people being forced from their homes. It’s time to change course. Rather than externalising borders and walls, we should be externalising real solidarity and respect for human rights.