This brief explores the politics behind the promise of ‘blue growth'. We have discovered that the discourse around blue growth, blue economy, blue revolution and the like is a masterfully mixed and powerful cocktail. The ingredients that make up this mix are the subject of this brief, and our intention is to explore the function of each component of the cocktail. 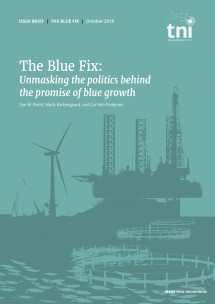 About the blue fix

The many ways that people use, exploit, care for and engage with ocean space have changed significantly over the course of the past century. The ocean was once primarily viewed—and governed—as a surface across which goods could be shipped. Today, in part due to technological advances and newly available methods for extracting wealth from the sea, the ocean is increasingly being reframed—and re-regulated—as a space for the ‘blue economy’. And importantly, the proponents of this blue-tinged growth promise a triple win on the ecological, social and economic fronts.

In this brief, we will explore the politics behind the promise of ‘blue growth'. We have discovered that the discourse around blue growth, blue economy, blue revolution and the like is a masterfully mixed and powerful cocktail. First of all, this discourse quenches the social thirst for action in the face of climate change by attracting private investment for protected marine areas and sustainable tourism. Secondly, it satisfies the growing global demand for healthy food and nutrition through the expansion of capital-intensive large-scale aquaculture, while brushing off the negative socio-ecological impacts of this technology. And finally, it refreshes the palate with a burst of wind energy and a splash of new deep sea minerals without disturbing the familiar and persistent flavour of oil and gas.

The ingredients that make up this mix are the subject of this brief, and our intention is to explore the function of each component of the cocktail. By doing so, we hope to provide a critical analysis of the interests and agendas behind blue growth, as well as the implications of this trend. We are not able to fully explore the many dimensions and sectors of the vast ocean environment in this short brief. Instead, we focus on what we see as the three central components, each of which had its own history and trajectory well before blue growth became a buzzword. What however makes this such a potent cocktail is the synergy of the three elements, brought together in one elegant framework for reframing ocean politics that can be supported by many stakeholders.

This ‘blue fix’ is made up of three main ingredients:


The term 'fix' is useful because its multiple meanings convey an addiction to a particular mode of extraction and production. It also describes how the formation of fixed capital in the shape of new infrastructure and investments in specific places (e.g. ports, luxury hotels, oil rigs and cargo ships) ‘fixes’ or sinks over-accumulated money capital into physical objects. Fixed capital also creates new opportunities for the circulation of other forms of capital (money, commodities) in new places and in new ways (e.g. investment in new regions or countries, and in new sectors such as deep sea mining). In times of crisis, this creates a temporary ‘fix’, or solution, to whatever may be hindering capital accumulation (the generation of surplus based on investments). We also use the term ‘fix’ to show how blue growth is simultaneously about staking out new opportunities for capital accumulation while at the same time accommodating existing formations of fixed capital (that is, actual investments into for example ports).

While it is important to track the discourse of blue growth, as some are beginning to do, the energy required to keep up with the next blue play on words also helps obscure the fact that if taken seriously, the blue economy has very real implications for how access to and control over ocean space is distributed, and for who is included in or excluded from these processes and politics. In the euphoria of self-congratulatory celebrations following blue fora – where policymakers clink glasses with investors, conservation NGOs and wind energy titans before gulping down highballs of this ‘blue fix’ – there is a tendency to ignore the social and ecological hangover that this cocktail will most certainly cause.

In theoretical ecological terms, protecting marine areas is an important part of mitigating climate change. But in practice, what conservation is achieving at the national level is overshadowed by the ongoing expansion of offshore drilling for oil and gas. Although the transition to wind and solar energy is emphasised, the deep sea mining for minerals required by these new technologies launches us into unknown ecological territories with little-understood consequences. Finally, small-scale capture fishing is effectively being squeezed out, while industrial capture fishing remains well positioned to expand into as well as supply industrial aquaculture with fish feed from small pelagic fish. The social and ecological consequences of these shifts are rarely addressed in blue growth policies.